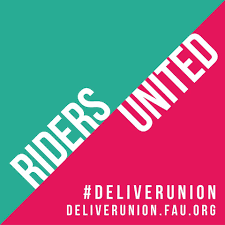 Deliverunion is a campaign launched by the anarchic grassroot union FAU (Freie Arbeiterinnen- und Arbeiter-Union). The campaign is aimed at Berlin riders working for Foodora and Deliveroo. Deliverunion fights for 5 key demands: the covering by the company of equipment repair costs that are currently borne by riders; an increase in wages of 1 euro per hour or per delivery; a sufficient amount of shifts and work-hours to make a living; transparency about the worked hours; and payment for shift-planning activities for at least one hour per week. In order to achieve these objectives, Deliverunion organises monthly meetings and occasional strikes. When, at the end of August 2019, Deliveroo stopped operating in Germany and made its riders redundant overnight, FAU offered support to its members over conciliation hearings. FAU also participated in the biggest ever international couriers’ congress that took place at the end of October 2018. The Congress resulted in the birth of the Transnational Federation of Couriers, aimed at organising transnationally to defend rights of workers employed by companies operating at a transnational level.